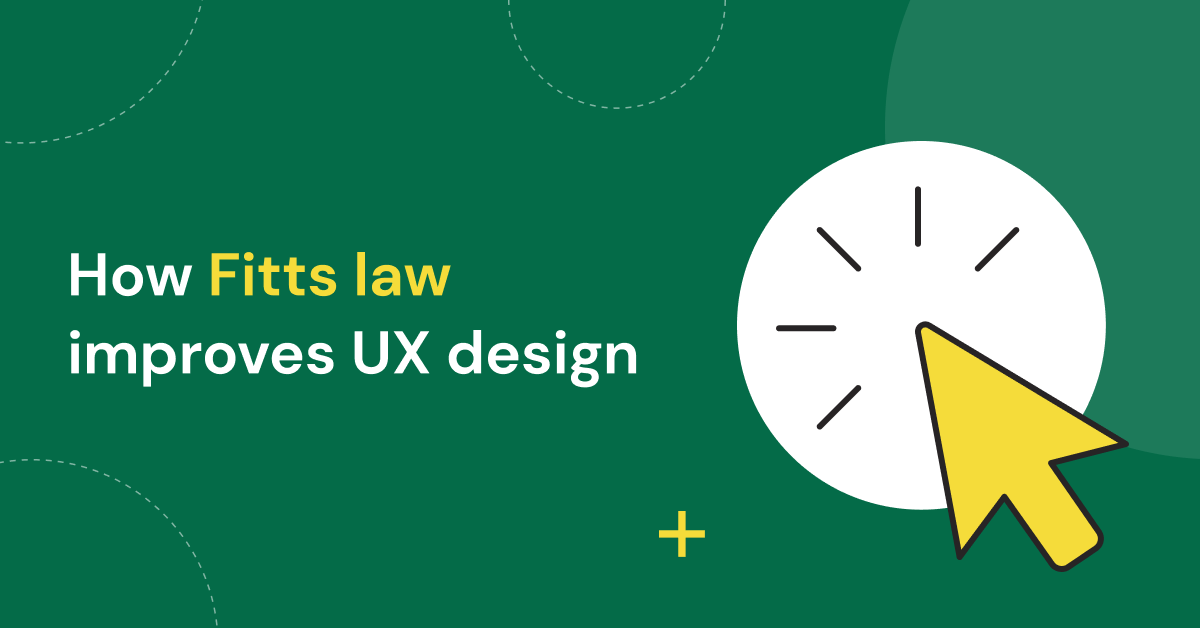 Do you know a recent study revealed that moving the add cart button to the left-hand menu of the website caused a 34% increase in sales by that site? That is how the user’s eye makes sense of the web pages. Now that is specifically relevant to web designing, explained by Fitt’s law. Understanding Fitt’s law will open another dimension in design. So, let’s see what is Fitt’s law and how Fitt’s law improves UX design.

What is Fitts Law & how Fitt’s law improves UX design?

Fitt’s Law states that the time to acquire a target is a function of the distance to and size of the target.

Targets should be large enough for users to accurately select them.

Targets should have ample spacing between them.

Targets should be placed in areas of an interface that allow them to be easily acquired.

Psychologist Paul Fitts was examining the human motor system in 1954 when he found out that the time required to move to a target directly depends on the distance to it while relating inversely to its size.

Fitt’s law states that quick movements and tiny targets result in huge error rates. It happens due to the speed-accuracy trade-off.

As per Fitt’s law, smaller buttons are tricky and time-consuming to click. This law hugely influences the user experience (UX) and user interface (UI) design for the right reasons.

The convention of making interactive buttons large, especially on finger-operated mobile devices, is a byproduct of this law.

Thus, Fitts’s law presents the connection between the time taken by a pointer to point to a particular target. Here the pointer can be anything used to show, say, a mouse cursor, a human finger, or a hand while, the target is anything ranging from a physical or digital button to a physical object.

Technically, Fitts’s law equation uses the width of the target in the direction of the movement. But, for most rectangular targets common in user interfaces, we can replace them with the smallest of the target dimensions, whether it’s height or width.

Fitts’s law can be grouped into 2 distinct categories,

1. Optimizing the Size of the Target:

One of the most prominent implications of Fitts’s law is to make targets big.
Fitts’s law demonstrates that people are faster to click, tap, or hover on bigger targets. Also, error rates go down as target sizes increases.

#2. Icon plus labels give better performance:

It goes without saying that icons plus labels are more prone to be clicked: Because

If you place targets too close to each other, there is a risk that people will accidentally overshoot and accidentally trigger the wrong target.

Note that this is especially likely to happen if the targets are small.

#4. Remember that Padding is not enough:

A padded target is usually a small target that has a bigger invisible active area around it. If people don’t realize that a target is padded, they will still slow down as they approach it in order to make sure they hit the visible area.

The edges of the screen are “infinitely deep”; you can’t miss the edge as the mouse stops when it gets there. Also, this infinite depth is doubly true for corners, so those are the easiest to select areas, not under the mouse.

Do you know that the different types of menus make a difference in movement time? Yes!  A linear menu, a rectangular menu (ribbon menu) or a pie menu produce a different effect on the click factor.

2. Place Related Targets Close to Each Other

If you know that a set of controls will be clicked in a certain order, place them close to each other (but not too close — see guideline above) to minimize the distance between them and optimize overall task time.

For better UI/UX Designing: Why do we need to apply -SOLID- software design principles?

Using Fitt’s Law you can control different aspects of human cognition. It will help in interaction design. This way you will find yourself much better equipped to put yourself in your users’ shoes. Use Fitt’s Law and be a better Designer!

Looking forward to improving your UI/ UX Designing skills? Then there is the course that will handhold you to become a better UI/UX Designer in just 3 months.

How to Start Competitive Programming in 5 steps?

How to use Robot Class in Selenium using Java? Step-by-step guided tutorial!